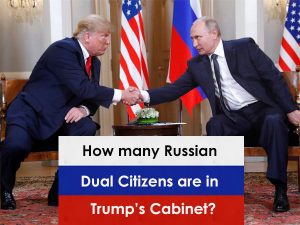 Here’s a petition regarding dual-citizens within government, which is actually rather important. Important enough that the Constitution put an explicit requirement on the office of the President — “No Person except a natural born Citizen, or a Citizen of the United States, at the time of the Adoption of this Constitution, shall be eligible to the Office of President” — the reasoning here is obvious and, just as Jesus said in Matthew 6:24, “No one can serve two masters; for a slave will either hate the one and love the other, or be devoted to the one and despise the other.”

The threat they were concerned with, in particular, was someone with foreign loyalty obtaining the Constitutional appointment of the President to the role of Commander in Chief, and thus able to command the armies and navies in suppressing the people themselves. During the constitutional conventions they were debating on how to do this until John Jay sent a letter suggesting that “natural born Citizen” be the qualification for President. 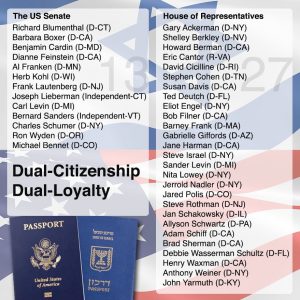 There’s an article I came across, with the mind-bendingly stupid title of “wild viagra uk” (archived) which lauds fractured loyalties, claiming that it’s time to celebrate “the complexity of 21ST century identity” and conflates ‘loyalty’ and ‘love’ — ignoring that you can love someone and still dislike, even hate, them (anyone with siblings will understand) — trying to square the circle saying of a hypothetical Israeli-American war: “I would work for a moral resolution, whatever that means, whether by the victory of whichever side is right or by negotiation.”

This is my most popular brochure, to date. It seems to accurately portray the mindset of an uncomfortably large portion of law-enforcement officers as well as showing why the government seems to push for ever more gun-control.

Here is the latest revision of amendments to the Constitution for the United States that I would recommend and the reasoning thereof.

We see this more and more as the government “picks winners and losers” by deciding to bail out businesses that would otherwise fail at the expense of taxpayers, ignoring every taxpayer who says “enough is enough” and continuing to sell its Citizens into a real slavery — $20 Trillion, and more, which is secured by the promise of the Citizen’s future earnings (i.e. the income tax) with no intention of ever paying it back is nothing less.

As this continues we will see more and more codification of exemptions from the law to government agents, from the President down to the street-cop, to city employees to Congressmen. This is the world that they want: to be at the top, crushing down on the insignificant (you and I), lording their positions and power over us.