First the Buffalo, NY shooting, and now the Uvalde, TX shooting… sowing outrage and dissent against the concept of gun-ownership, while simultaneously just in time to allow the powers that be to try to distract you from things like the failed Disinformation Board being ‘put on pause’ (rather than disbanded), or the formula-shortage-for-you-but-not-illegals fiasco, or the inflation and package shrinkage. Any of the million things that impact you directly, the Powers That Be want to distract you from in order to further their own goals.

And what better distraction than mass-shootings?

Betrayal, at a Fundamental Level

There is a fundamental betrayal in-play here, aside from these events being played for obvious political points, and to illustrate the magnitude of this treachery by those who are ostensibly our leaders, let us employ what I’ve heard as an exercise in law-school: where a case is presented and the details are added or slightly changed and re-presented again to illuminate the subtleties of the law, of guilt and innocence.

Similarly, we will use a modified Uvalde as our case for this:

Now, you still might be inclined to call the father guilty, thinking “the police are there to stop the shooter. They have a duty to protect the public, that includes both the parents and the children.”… but this flies in the face of legal reality of Warren vs District of Colombia where the courts have ruled that there is no duty for the police to protect any particular private citizen: they have no duty to you, to children, to the elderly, their only duty is to the nebulous ‘public good’ (that obviously includes politicians and judges).

Indeed, given that there appears to be a link between the Buffalo shooter and the FBI, via a retired agent, and the police in Uvalde holding back parents one has to ask “Is everything a false-flag?” and “Is everything being used against me?” Especially considering that there is some evidence that Uvalde had some form of military involvement, and with Biden suggesting that the schoolhouse (evidence) be destroyed…

The answer is ‘probably’ — if the government leaders and authorities doesn’t see you as part of ‘their people’, why would you imagine that they would do anything for your benefit? Indeed, this is the betrayal that hurts and outrages us the most: those in leadership positions sacrificing their people to their own benefit, and this was illustrated as a counter-example of leadership in an excellent video titled “Why Leaders Eat Last”.

Much of this separation into us vs them in the realm of government authorities, at least at the local level, can be seen in the transition from “Peace Officers” to “Law Enforcement” — though some people note that the latter should more accurately be called “Revenue Enhancement Officers”, especially in cases involving asset forfeiture.

The difference in peace officer vs law enforcement can be subtle, and difficult to articulate, but consider the scenario of teenagers doing stupid things: in the law enforcement mentality the laws must be enforced, and “throw the book at ‘em Dano!” whereas with a peace officer, it would be more typical to give them a lecture (maybe the proverbial ‘smack upside the head’ and “Don’t be dumb!”), take them to their parents, and resolve things there at the lowest levels: in one it is all about how the Rules must be followed, in the other it is about “keeping the peace” — sure, sometimes you need to arrest someone, peace officers did that too, but the focus was less on hard compliance-enforcement and more on the community itself (which does need rules — but the rules are made for the community, not the community for the rules)… and what we see now in our own police is the penultimate evolution of the Law Enforcement Mindset: a slavish enforcement of The Rules, though selectively, and a disregard to the community at-large. (The last form that Law Enforcement will take is that of pushing policies and rules that are literally illegal, justifying themselves that because they have authority they must be in the moral right, and anyone opposing them must be morally evil.)

The reason that the tyrants wish you disarmed, is precisely so that this may happen — Noah Webster said it very well, that with an armed population enforcing unjust laws cannot be done: 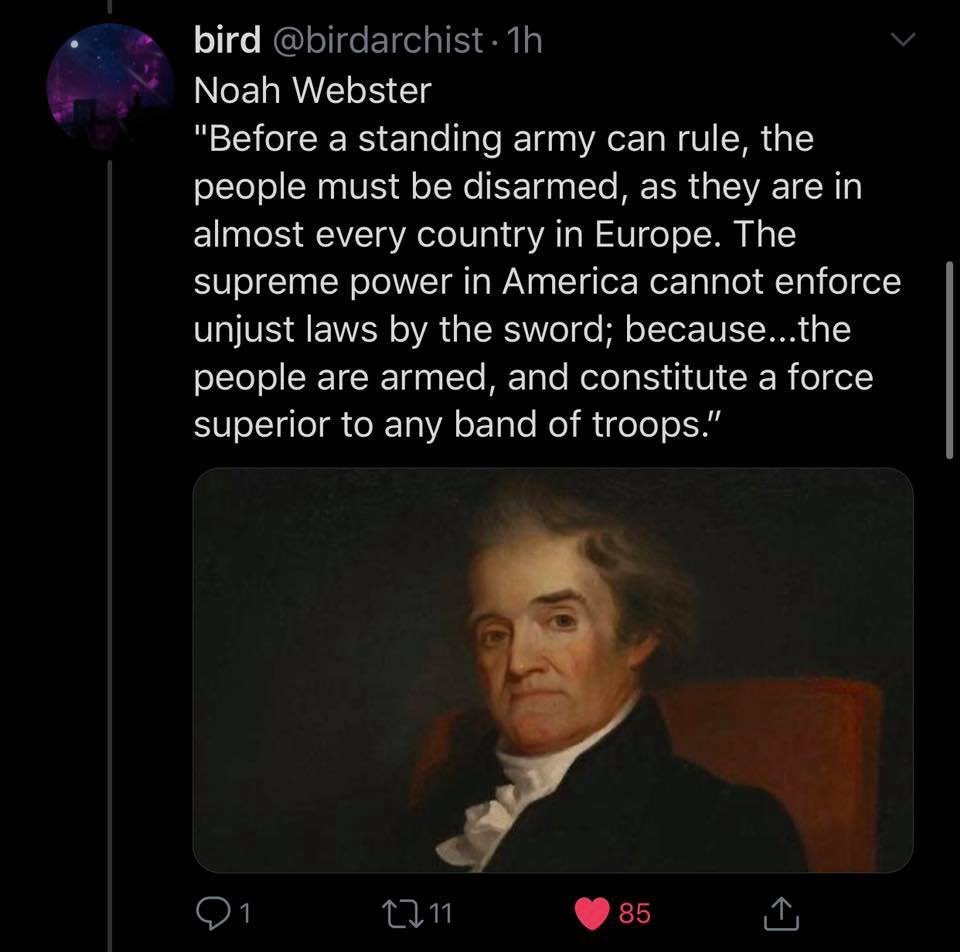 On that note, I wonder how long it will be before “I’m with the F.B.I.” will be seen with the same emotional-response of revulsion and disgust as “I’m a NAZI” would get you.

The ‘Elite’ Versus The ‘Everyman’

Since the start of 2022 we have seen the pushing of World War III, predicated and predicted from Putin and the actions of Russia in Ukraine — despite some of the areas in the conflict being Russia’s since the time of Catherine the Great (who died just a few years before the Louisiana Purchase) — being blamed for domestic problems like inflation and petroleum-production difficulties that started before the Russia/Ukraine conflict: throttling gas/oil production, paying for destruction of agriculture cropland, and so on.

All of these are being pushed into the public news-sphere as justification for the hostile stance that the U.S. leadership is taking against Russia, attempting to get the people onboard to actual war with Russia; this despite a very large purpose to avoid war in the general populace, and especially among veterans. (The tragic result of the “Afghanistan Pull-Out” is a defeat, and is one factor that the elites simply do not understand: morale is essential to operational capability.)

What we are seeing is a very wide split between the “Average Joe” and the ‘Elite’ (whether this is Trump or Biden) — where the Elite are signaling their willingness to spend the lives of the citizenry, in addition to pushing the blame for the policies they are implementing onto the ‘War’ with Putin/Russia. (Things like pushing “Electric Vehicles” onto an electrical production/distribution-grid that cannot handle the increased load, all while shutting down electricity production. — We saw this split illustrated in how, during the “lookdowns” and “mask mandates” the ‘Elite’ were given special and preferential treatment, excepting them from the very rules they forced on everyone else.

It is obvious that those in power in the U.S. see themselves as apart, separate and distinct, from the average man: above the law, beyond account, and completely protected. This protection is both government offices and also with corporations, a good example here could be the new Twitter censorship policies against anti-war sentiment; this underscores the point: the ‘elite’ see themselves as having no obligation to you, they see you as ‘other’ and expendable.

Then there’s the connections among the elite, surrounding Ukraine: (1) Biden’s, Romney’s, Kerry’s, and Pelosi’s children’s connections have been ‘fact-checked’ by Reuters, (2) and then there’s the World Economic Forum and it’s Young Global Leaders, which have connections to Zelenskyy, Putin, Trudeau, and Ivanka Trump.

It’s all theater… and you & I? We’re the ones who they expect to bleed and die to cover up their corruption — whether it’s ‘Russia, Russia, Russia!’ or ‘Chyna!’ or the hoard of illegals whose  babies they’d rather feed makes no difference to them; what they’re trying to do is ramp up pressure on the Average Joe (via gasoline, electricity, & food) so that they perceive the release of war as the solution. — Even if the signals that they’re willing to have your children killed in a foreign war is mere virtue-signaling, the elite want prices on these that you cannot afford; they want to make ‘living’ or ‘surviving’ unaffordable… Why? 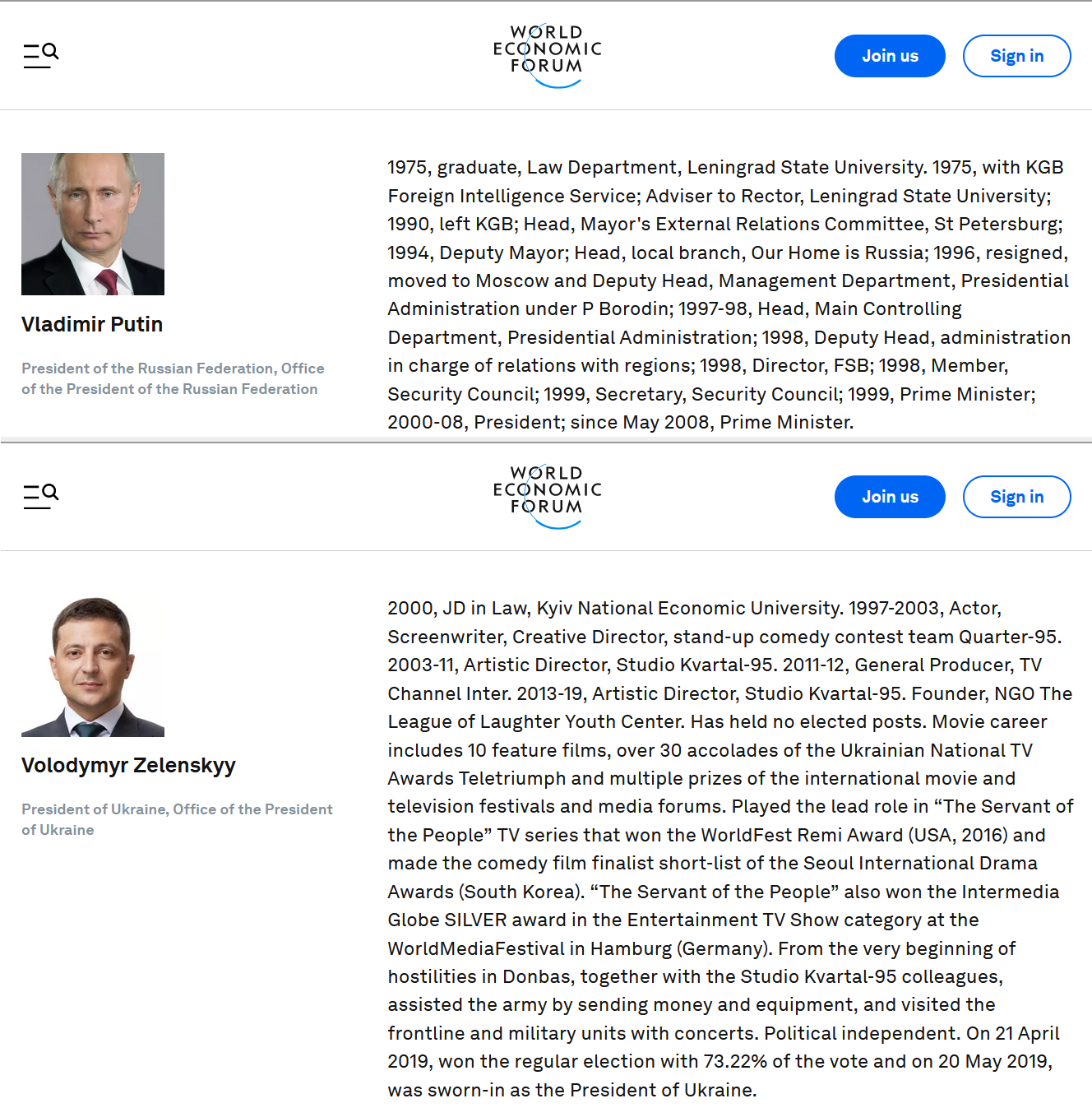 We observe the non-action of the government on the obvious attacks on the production of food — all the more puzzling, given the stringent denial that such is suspicious, or a cause for concern — even the shutdown of baby formula factories, removing the availability of the formula on the store-shelves… even as the government donates formula to illegals, even as they push these ridiculous wars: Russia/Ukraine, and (soon) China/Taiwan.

The attitude shown, illustrates how they are pushing Government Sponsored Genocide Via Starvation, Holodomor (as a verb)  — or, if you want a more European experience of the Government being involved with starving citizens, consider the Irish Potato Famine; where the British had used about half of its military might to forcibly extract food while the Irish starved. Obviously, the British government held the exportation of food to be of greater importance than the Irish people themselves — how much do you want to bet that the US will do similar? Perhaps wringing their hands and crying “How can we interfere!? These are private corporations, and this would be interfering in contracts!” on the cameras, all while holding back their sadistic glee at the prospect of mass starvation?

All of these food-plant ‘accidents’, all of the energy production ‘difficulties’, all of the promotion of ‘contracts’ to superiority over law (see the defense of Pfizer & Moderna) aim for one point — evasion of accountability, even while forcing “let’s you and him fight”-styles of distraction.

Trump won’t help us, he’s still proudly touting his bioweapon; Biden won’t help, he’s just a puppet — our only hope is to turn to Jesus, pray, and look out for our fellow-citizen.